No FiT? No problem!

It’s been some time now since the end of the Feed in Tariff (FiT) in 2019, and the way we thing about energy is changing fast. It has commonly been thought that because we can only get paid a small amount for our export from microgenerators that it’s not worth generating. The “replacement to the FiT” is the Smart Export Guarantee (SEG), which is the mechanism for this payment.

Why pay 15p/kWh for import and only receive up to 5p/kWh for export?

Well, think about it this way instead!

As technologies including solar PV, battery storage, heat pumps and electric vehicles are becoming attractive for many reasons, not least environmental, the electricity market is adapting. We were always confident this would come along before too long (as you can see from this article we wrote in April 2017), and it’s now here and it works.

In order to support the grid’s continuity and quality and to increase the contribution from renewable energy to the UK’s grid energy suppliers are adapting, too. Notably Octopus Energy are pioneering this concept with their Agile tariff, and others will be close to follow suit.

2 days worth of Agile pricing, with price plunge – being paid to use electricity! (from excellent resource at – https://www.energy-stats.uk/octopus-agile-southern-scotland/)

Octopus Agile is a Time of Use Tariff, which uses smart meter technology to alter the unit cost of electricity every half an hour. This means that the cost tracks the wholesale price of electricity, which in turn is strongly related to the renewable contribution from wind generation, and increasingly from solar. It costs more to burn fossil fuels to run gas (or coal) power stations, so the more renewables the cheaper the cost. Also supply/demand also plays a significant role in this, so when demand is high the cost is high and vice-versa – but we can deal with that!

From the graph above, we can see that the price varies a lot over time, but take out the high peaks (using your battery) and use the lowest price instead the average is very low. Note that this is quite unusual to go negative at the time of writing, but last weekend had a windy spell early morning with low demand resulting in this negative pricing. It’s helping the grid, your costs and the environment to make full use of these times!

What’s all this got to do with microgeneration and storage?

With a time of use tariff and storage we can pick and choose when it’s cheapest and cleanest to import, storing energy in a battery for use in the home when require…or in an Electric Vehicle (EV) to offset fossil fuels…or as heat in our homes or hot water. This is known as “time shifting”. We can then include also “free” energy from our on site generation, too!

So this technology along with smart tariffs have made an important shift – we don’t pay what we used to for electricity, it’s actually far less per kWh on average. In fact, it could even be that the average import rate is LOWER than the average export rate! If you thought the export rates were far too low, then read on… 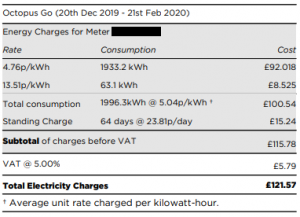 For example a home with Solar PV, Tesla Powerwall and EV on a tariff with 4 hours of 5p/kWh each night and 14p/kWh the rest of the time in December 2019-February 2020 consumed 1996kWh from the grid at an average of 5.04p/kWh. The export rate is 5.5p/kWh (on Octopus Outgoing), though this site was getting ~5.38p/kWh as part of the Feed in Tariff scheme. The solar generated about 270kWh over this period, which was all consumed in the home. Note that this covered the whole home inc electric cooking, plus a larger percentage of the fuel costs for transport (around 4,000 miles or over £400 of petrol/diesel!).

Sure, there’s not really any export in the depths of winter…but in the summer the import remains about the same (charging vehicle at the cheap rate, perhaps we can discount the household consumption as this is self consumed from solar) but export increases due to the surplus generation – so the average import cost stays close to 5p and we export at a little more than 5p. So, we’re using the grid to store electricity generated in summer for use in the winter…in essence!

Everyone’s needs are different, consuming different amounts of energy at different time of the year, per day and so on but this concept remains the same. It’s now possible to reduce your import costs massively with the use of technology.

For more information, or to see how this might work for you please get in touch!