You are in Home > Products > Eddi 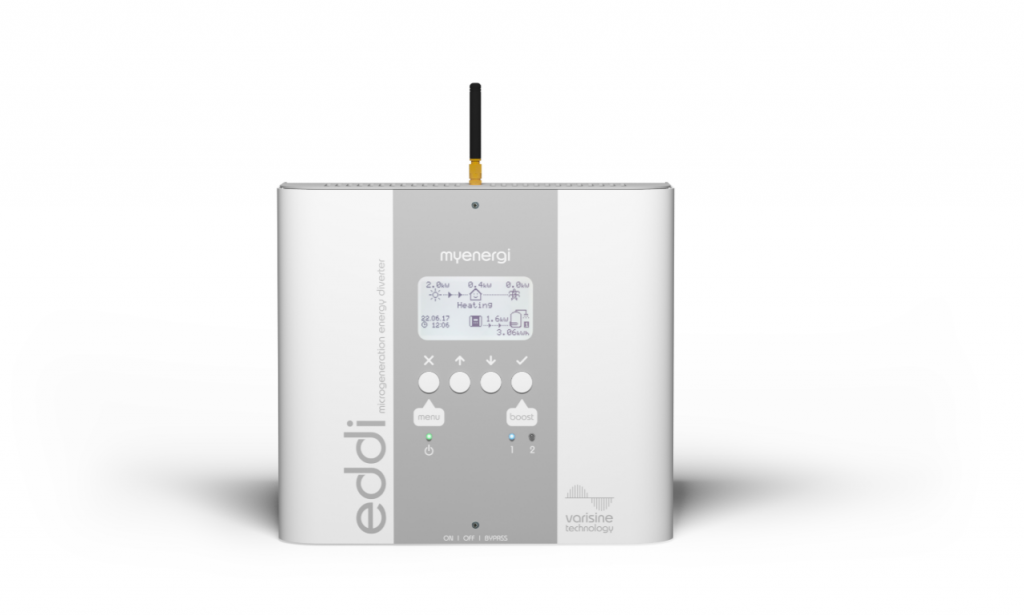 Eddi is a proportional controller which sends spare electricity from your renewable generation system to a resistive heater – usually an immersion heater. This means that you can use even more of your own clean energy as possible not just for electrical devices, but for heating purposes too.

Usually this would be sent to your existing immersion heater in your water tank, but many options are possible. When combined with other heating systems such as biomass and heat pump systems, as well as a normal fuel boiler your main building heating cost can be offset too.

The add on Relay and Sensor board adds an imprssive array of other possibilities, often making Eddi (and its app support) a centre for your home’s energy automation.

Eddi can also be paired with the Sunamp heat battery when appropriate.

Eddi Systems will soon be able to be scaled up in order to meet the demands of Export Limiting systems. Ask us for more details on the possibilities here, as it’s currently a fast changing sector.

Eddi is a device which looks for excess generation from a renewable energy source and proportionally diverts it to a load. The best use of Eddi is for grid connected systems where it is expected that at times the generation from the renewable source will exceed the demand for power in the property. Normally this power would be exported to the grid but using Eddi this excess power would be diverted into a useful load, usually an immersion heater in a hot water tank.

Is it worth getting Eddi?

The best application for Eddi is when hot water is required on the premises and you would otherwise be heating the water with an inefficient/expensive source such as an oil boiler. This means you will reduce the cost of water heating. If you already have a tank and immersion heater installed, the Eddi installation is usually relatively straightforward. The system can be installed at the same time as your generator or can be retrofitted at a later date. For more details, get in touch with us and we will be happy to advise.

How much money will it save me?

This depends on how you use electricity in your property, your demand for hot water and how you would otherwise heat water. Here are a couple of scenarios:
For both scenarios assume a domestic 3.6kW Solar PV system is installed…

1)      In the house water is heated using an old, potentially inefficient oil boiler. There is a lot of hot water used in the house. Only a small amount of electricity is used for other things in the property during the day. In this scenario lots of energy that is generated by the solar panels will be spare (i.e. unused) and Eddi will send this ‘spare’ power to the immersion heater, saving on heating the water tank with oil which can be expensive. Eddi will lead to large savings and offset fossil fuel use!

2)      If you have a mains gas condensing boiler which is very efficient and don’t use a lot of hot water  in the house (e.g. if you have electric showers and cold feed appliances) then there will be very little need for hot water. Also, if a lot of electricity is consumed in the house during the day there will only be a little ‘spare’ power for the Eddi to divert. Eddi will save less money than Scenario 1, but still offset fossil fuel consumption.

How do I get an Eddi installed?

If you are already having a renewable energy system installed by Solar and Wind Applications Ltd, just ask us about adding Eddi to your system and we will be happy to assist.

Or Request a Call Back: